Should commercial buildings opt for a ceiling?

When designing and fitting out a commercial office building, it can be easy to focus on the aesthetics of the space. An increasingly popular trend in architectural designs for office spaces is the industrial look. This look is characterised by a concrete slab and exposed beams and services rather than a more traditional ceiling. However, while this design might be eye-catching, it has the potential to present ongoing problems.

As Alex Foster, a Team Leader at Resonate Consultants, explained, ‘a ceiling offers many benefits, and when you omit that ceiling, it presents with potential acoustic problems.’

The exposed services synonymous with the industrial look create a certain set of compromises in terms of acoustics. With no solid ceiling to reduce the levels of emitted noise, these exposed services can generate noise levels that exceed the recommended range. Whilst some level of continuous background noise can be beneficial, masking distracting office noises such as printers and phones, high background noise levels can themselves be ‘distracting and otherwise fatiguing,’ said Alex.

Another potential problem centres around rain noise intrusion. Those inhabiting the top floor of a traditional office space can expect protection from sound thanks to a solid ceiling. However, where a more modern office design has opted against a ceiling and also features a metal deck roof, this can potentially create excessive noise from rain. As such, Alex explained, ‘the impact of raindrops can be very noisy- creating a high noise level in the space.’ Consequently, such noise makes it hard for employees to work without distraction if there is sub-par acoustic control in buildings.

For those working in an office building with a floor above them, rain noise won’t be such a challenge. Rather, noise transfer through the floor may be an issue. ‘Noise transfer can be both structure-borne and airborne,’ Alex said. For example, impact noise relates to footfall noise or any activity that generates an impact on the surface of the floor, transmitting a vibration through the structure which is then re-radiated in the adjacent space. Airborne noise refers to sounds such as music or people talking and shouting.

The omission of a ceiling also has an impact on the way internal partitions such as walls are designed. In a traditional office space, walls can either go up to the ceiling or penetrate the ceiling, offering a higher level of separation. In a more modern office space without a ceiling, to create an enclosed space such as a private office or meeting room requires an alternative approach. As Alex explained, ‘you can build the wall full height to the underside of the slab or build a solid ceiling on top of the walls and end up with a box/pod.’ It’s important to consider that while such a solution will mitigate this problem, it is a costly alternative.

When assessing the viability of modern architectural ceiling design trends, there is a final issue to consider— the control of reverberation, which as Alex explained, is ‘sound that bounces around a space off acoustically reflective surfaces and builds up.’ Normally, ceiling tiles provide absorption needed to reduce the amount of sound being reflected back into the office space. ‘Whereas a concrete slab or metal roof is very reflective and doesn’t absorb much of that energy, and will generally increase the noise level in the office.’

Increased noise levels in an office area can have broad implications on staff. In terms of efficiencies, as noise levels can affect speech intelligibility, it can be difficult for staff to concentrate on important phone calls or the task at hand. All of which results in decreased productivity levels. However, there are also individual impacts to consider. For example, a poor acoustical environment can lead to fatigue and headache pain. 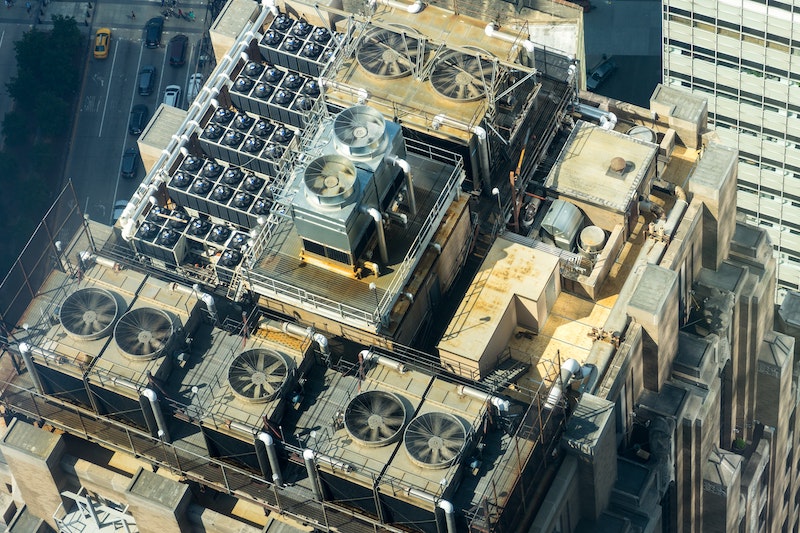 These operational and individual impacts highlight how the decision to opt for an industrial look over a more traditional ceiling can affect the whole organisation. While the impacts are far-reaching, there are solutions that can be implemented in order to mitigate these challenges.

In terms of navigating the noise from exposed services such as air conditioners and fans, Alex suggested using multiple smaller fans rather than a single large unit. Another technique centres around relocating mechanical units to areas away from open plan offices or placing them in a bulkhead. Where this isn’t a viable option, individual units will have to be treated. ‘We either recommend to wrap them in a mass load vinyl type material or box them in,’ Alex said. When it comes to the challenges of dealing with rain, impact and airborne noise, it’s important to install solid elements. To deal with rain noise, a solid element such as plywood beneath the purlins can provide protection. Meanwhile, impact and airborne noise can be dealt with by carpeting the top of the slab or by installing a resilient underlay beneath a hard floor surface.

For reverberation control, Alex suggested incorporating absorptive treatments on the available wall and floor spaces. This is because wall and ceiling panels, along with carpet and layered rugs can provide a good level of absorption.

While there are solutions available to help balance elements of aesthetics with functionality, it’s advisable to engage Resonate Consultants in the pre-planning stage of an office fit-out project.

Let’s discuss your next project today.

Addressing criteria set out for educational spaces With nearly ten thousand schools in Australia, improving classroom acoustics is highlighted as a gateway to better learning….

Much like our work with updating MBS 010, we were also enthusiastic to contribute to updating the Road Traffic Noise Guidelines during 2021. In South…

Australia is ideally situated to host several large-scale solar farms to convert energy from the sunlight, which is one of the most attractive renewable energy…

Acoustic
Back to Our News & Articles