With the fascination of caves heightened since the Wild Boars soccer team became trapped for a harrowing 13 days in a cave formation in Thailand, we thought we’d talk about some caves a little closer to home and how vibration from development might affect them.

The park is a visitor destination, with a camping ground and caravan park, dormitory accommodation for groups, picnic grounds and a licensed cafe. The caves are also of important ecological significance as thousands of southern bent wing bats breed there each year.

As is often the case in National Parks, construction work does sometimes need to occur. Whether it’s footpath or road creation for accessibility to amenities, Resonate Consultants are often called in to assess the noise and vibration monitoring and impact of certain activities and provide recommendations and strategies for reducing the environmental impacts of construction. 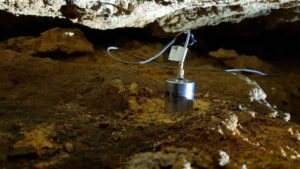 The intent of our investigation was to understand the vibration transfer from surface level construction activities to the cave decorations. Of particular importance was the impact of vibrations on speleothems, or straws,

which are structures formed in caves by the deposition of minerals from water over thousands of years.

In this case, the longest straw in the cave is approximately 200cm long.

As a professional acoustic engineering firm, we have many tools at our disposal to measure and test potential impacts of noise and vibration. We also refer to high quality acoustic research and published papers, where similar studies may have been completed in other parts of the world. 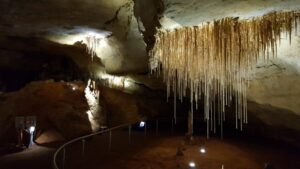 The results indicated that surface vibration measurements were likely to be generally representative of that measured in the cave in the straw locality. During this time, vibration was easily felt within the cave including on the handrails which were connected to the cave floor.

Since the late nineties, several investigations have been made to check the influence of earthquakes on speleothems in caves. Of relevance is paper “Prevention of speleothem rupture during nearby construction” (2002) published by Lacave et. al. The paper documented the results of a study that evaluated the risk of speleothem rupture caused by explosive shots that were planned for the excavation of a new highway tunnel.

From the vulnerability curves presented by Lacave et. al, it was also possible to estimate the per cent probability of rupture vibration level for the speleothems located in Naracoorte Caves.

Recommendations for reducing the environmental impacts of construction

The results showed that the cave area near the straw decoration was sensitive to surface vibration. We understood that a relatively thin rock layer exists between the surface and the straws (ie approximately 3m) and also noted that the rock protruded above the surface soil layer in places. The cave vibration level also doubled in magnitude when the small compaction unit traversed over the cave rock layer protruding through the surface soil layer.

We also suggested that when appointing contractors for future works, a vibration management plan be requested as part of the contract. The plan should document how the works will be managed to ideally not generate more than 6 mm/s PPV at the surface through construction works. We adopted 6mm/s PPV with intent to reduce the probability of rupture to 0 per cent.

For thorough vibrational monitoring and acoustic construction strategies for your environmental project, get in touch with Resonate Consultants today.

Noise environmental impacts on people, animals and buildings If you are about to undertake a construction project, you have an obligation to make sure that…

Helping Zoos Victoria protect their animals At the heart of all zoos or sanctuaries is equipment that helps to keep ecosystems habitable for the animals….

We all live and work in a fast-changing world. It is vital that we take care of it. Climate change and environmental damage affect everyone….

Environment
Back to Our News & Articles